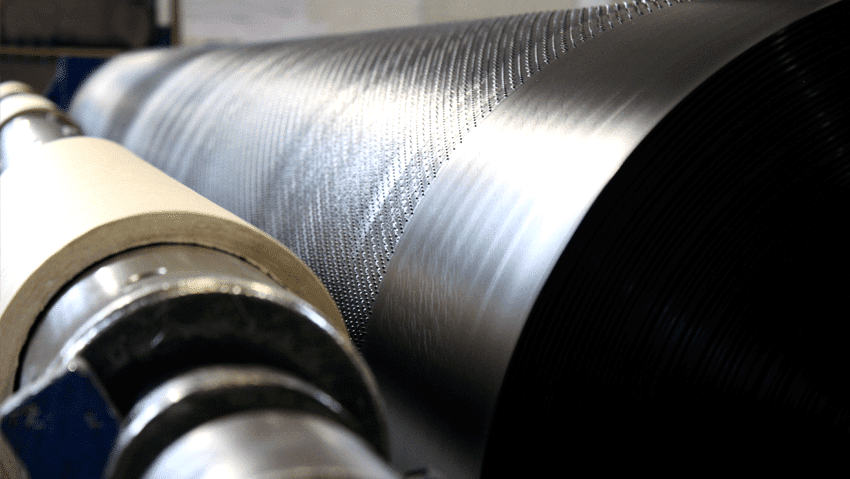 The Extrusion–Calendar (EC) system for geomembrane manufacture is widely known throughout the industry and is generally accepted as the best way to ensure a consistent thickness and optimum properties of products. It is used in many industrial liner applications, including the manufacture of waterproofing geomembranes. The current state of the art is similar to blown extrusion (BE) and involves a block of three cylinders arranged in parallel, with the lower two lower cylinders receiving the material extruded from a flat head–extruder assembly of the same width. The cylinder assembly is called a calendar and applies heat treatment to the product, followed by gradual cooling, straightening and surface finishing of the geomembrane. Finally, heat is dissipated along a long cooling train, at the end of which there is a driving head and a roller.

Atarfil has complemented this technology with its own system for controlling the thickness of geomembranes, in addition to a specially designed calendar unit, giving our products unique properties.

Advantages and drawbacks of blown and calendar systems.
A quick comparison of calendar and blown systems reveals the following aspects:
The consistency of the thickness in electronically controlled calendar production, such as the system used by ATARFIL, can reach ±3%.

In contrast, the best tolerance of a blown system is ±10%, largely a result of turbulence caused by the air blown inside the manufacturing column. For blown systems, thickness control is provided indirectly, whereas for calendar systems it is direct. This is important because perfect welding also requires a perfectly consistent product that guarantees the weld

parameters. In the calendar system, there is a real heat treatment of the base product, since it is in contact with the calendar roller train. In contrast, the blown system does not have a calendar and as such there is no heat treatment, except that provided by the blown air. As explained below, the heat treatment is directly responsible for the final properties of the products.

Maximum flatness and consistency of the geomembrane surface. At Atarfil, this is complemented by a special treatment of the roller train, which gives the upper surface an anti-slip texture that facilitates installation.
Absence of the lengthwise cracks that are normal in the blown system, a result of the partial folding process of the blowing column during the manufacture process, which is not necessary in the calender system.
It goes without saying that the folds in the blown system represent weaknesses in the material, particularly for a crystalline material like high-density polyethylene (HDPE).

Maximum flatness and consistency of the geomembrane surface 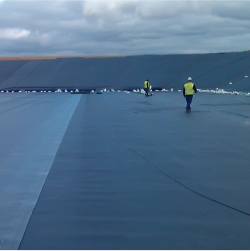 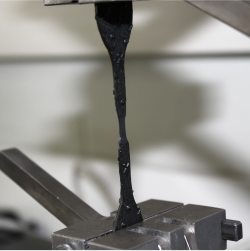